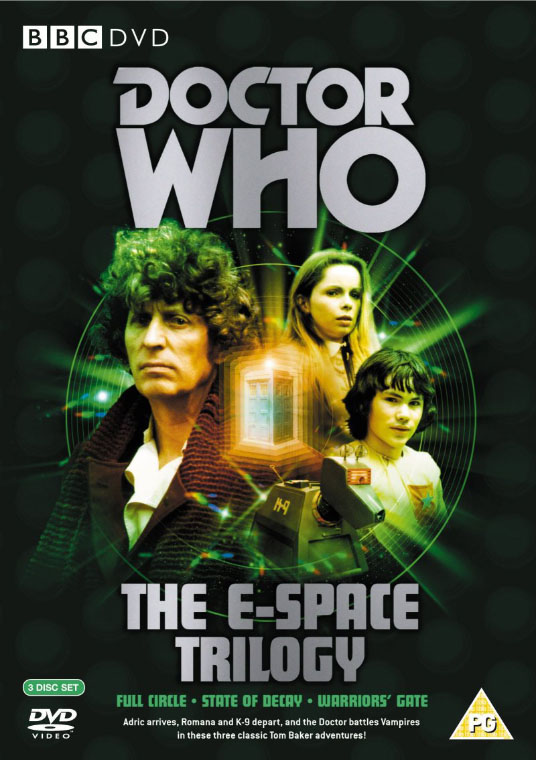 The Doctor discovers the TARDIS has fallen into E-Space, an alternate universe, and landed on the planet Alzarius. The Doctor and Romana find its only inhabitants are living on a vast, crashed spaceship they have been repairing for generations to return to their home planet, Terradon. But Mistfall, a mythical time of terror, is coming again to Alzarius, and an eerie menace is rising out of the misty marshes. But why have huge poisonous spiders begun to appear in the Alzarian food supply? And what is the secret of the strange marshmen? The Doctor and Romana must solves these riddles and more if they are to have any chance of returning to their own universe.

Searching for a way out of E-Space, The Doctor and Romana, joined by a young stowaway, land on a planet eerily similar to Medieval Earth. Its people live in fear, under the thumb of the Three Who Rule, cruel lords who suppress all learning to keep their subjects ignorant and helpless. The Doctor falls in with a group of rebels and discovers a cache of advanced technology banned by the Three Who Rule. But who are these ruthless monarchs? Meeting the lords and exploring their tower, he and Romana uncover a chilling secret. The Doctor realises an ancient evil is rising once again, a terrible threat to the universe fought by his own race long ago, and one that only he can destroy now.

A strange creature forces its way into the TARDIS While The Doctor is searching for a way out of E-Space. It steers them to a white void occupied only by the ruins of an old building and a sinister spaceship. The void is actually a gateway to the past and future, a cosmic mirror guarded by axe-wielding robots. And the creature that brought them here is Biroc, a Tharil, a race doomed to be hunted and enslaved. Biroc seeks freedom for his people, while the captain of the spaceship seeks escape from the alternative universe — and will kill every Tharil he holds to break free. The gateway offers the only exit, but the void is contracting. Are The Doctor and his friends fated to spend eternity in E-Space