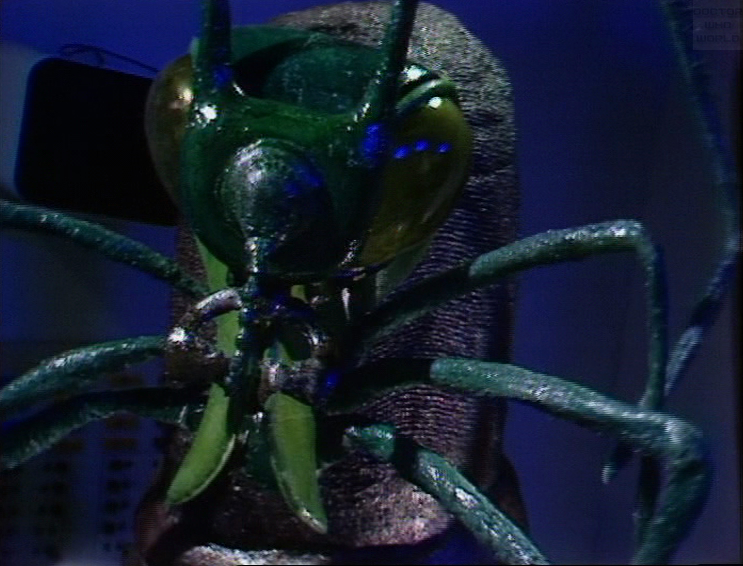 The Ark in Space

The Wirrn were roughly human-sized, though with an anatomy more like an Earth-based insect. Their heads were made of two large golden eyes, long, floppy antennae, and three small mandibles. Underneath the head were larger mandibles which they used to talk. They communicated by squeaking, though Noah was able to speak human languages. The head was attached to a long thorax which had six long arms attached to it. Though thin, these arms were as strong as a human’s and could be used for similar tasks. Underneath the thorax was a long abdomen. They could recycle carbon dioxide back into oxygen.  The Fourth Doctor believed this was almost certainly done using enzymes.

Wirrn lived in space for most of their life and thus they could reuse their waste products with special enzymes, allowing them to survive without fresh air for years. They would only occasionally land on planets to gather air or food or to breed.

The Wirrn were a very tough species, able to survive in a wide variety of environments, energy blasts, and apparently diamond-tipped blades. (Placebo Effect) The Wirrn’s most important weakness was their vulnerability to electricity. (The Ark in Space)

Wirrn had an unusual life-cycle which was shown on the Ark. The Wirrn started breeding with a queen, who searched for a suitable planet. The Wirrn used cattle-like creatures in the Andromeda Galaxy, but they could also substitute humans. When the Wirrn Queen found a suitable host, it laid an egg in the host. The larva gained all the racial memories of the Wirrn, as well as the host’s knowledge. Eventually, the larva ate the host and escaped.

This larva was a large, green, slug-like creature with several small limbs. These larva, while not as tough as an adult, were still resistant to a large amount of damage. If damaged, they could simply shed their skin, revealing an undamaged skin underneath. The larva produced a green slime, which could infect other creatures, turning them into larvae as well. These infected individuals gained all the knowledge of the Wirrn and the previous host.

Eventually, the larva started to undergo metamorphosis, creating a large pupa. After a few hours, full grown Wirrn came out of the pupae and set out to do the bidding of the swarm. (The Ark in Space) One of the these adult Wirrn, generally the first one infected, would become a Swarm Leader and control the actions of the other larvae which were infested at the same time. Some would also be turned into Secondary Queens, allowing them to lay eggs in more hosts. (Placebo Effect)

The Wirrn had a presence in the universe for a long time. A dead Wirrn was found in a prison ship that launched in 2000 BC. (The Stones of Blood)

The Wirrn left the Andromeda Galaxy at some point before the end of the 40th century, looking for new sources of hosts. They eventually made their way to the Mutter’s Spiral, where they occasionally infested the odd planet. As they gained new hosts, they were able to learn about the political structure, allowing them to plan out an invasion. Eventually, they reached Earth and were able to infest Miles Mason. Using his connections and scientific skills, they were able to produce drugs to be given to the athletes of the Olympics which would infect them. Those who were not infected immediately would then return to their home planets and infect others.

The Swarm Queen then moved to Micawber’s World to better organise the swarm. She converted the people who came to investigate the tunnels of Micawber’s World, adding to the swarm. As well, Reverend Lukas of the Church of the Way Forward picked up her telepathic communications and believed that she was his Goddess.

Using the murder of the Duchess of Auckland as a distraction, the drug was then activated. Unfortunately for them, the Space Security Service (SSS) was prepared and ready to drive back the larvae. The swarm was eventually stopped when The Doctor confronted the queen, exposing the wiring of Micawber’s World and electrocuting her. Despite this, some of the larvae escaped and stole a ship, instinctively escaping back to the Andromeda Galaxy. As well, the body of the queen was taken by Reverend Lukas, who wanted to spread his Goddess’ message throughout the galaxy. (Placebo Effect)

Thousands of years later, the humans first reached the Andromeda Galaxy and started to expand there, destroying the Wirrn Breeding Colonies along the way. After thousand years of fighting between the two species, the Wirrn were driven out of their own galaxy and forced to drift into the universe.

One queen ended up in Mutter’s Spiral and discovered the frozen survivors of an irradiated Earth in the Ark. Though the queen was killed by a security device, it was able to implant an egg in one of the humans, Dune.

Eventually, the larva escaped and was able to infect Noah. The Wirrn intended to use the sleeping humans as a food source and to gain their advanced knowledge to help take over the “empty” Earth. However, Noah’s human side reasserted itself and led the Wirrn into the Ark’s transport ship, even though he knew it was rigged to explode. (The Ark in Space)

Human colonists in Wirrn space began sacrificing one of their number to have Wirrn queens gestated inside them, due to the influence of human minds on the queens, peace was achieved between the two species. Following the expansion of GalSec and their takeover of these existing colonies, however, the sacrifices were ended. As a result, a huge and vicious war erupted between human and the Wirrn, lasting generations. (Wirrn Dawn)