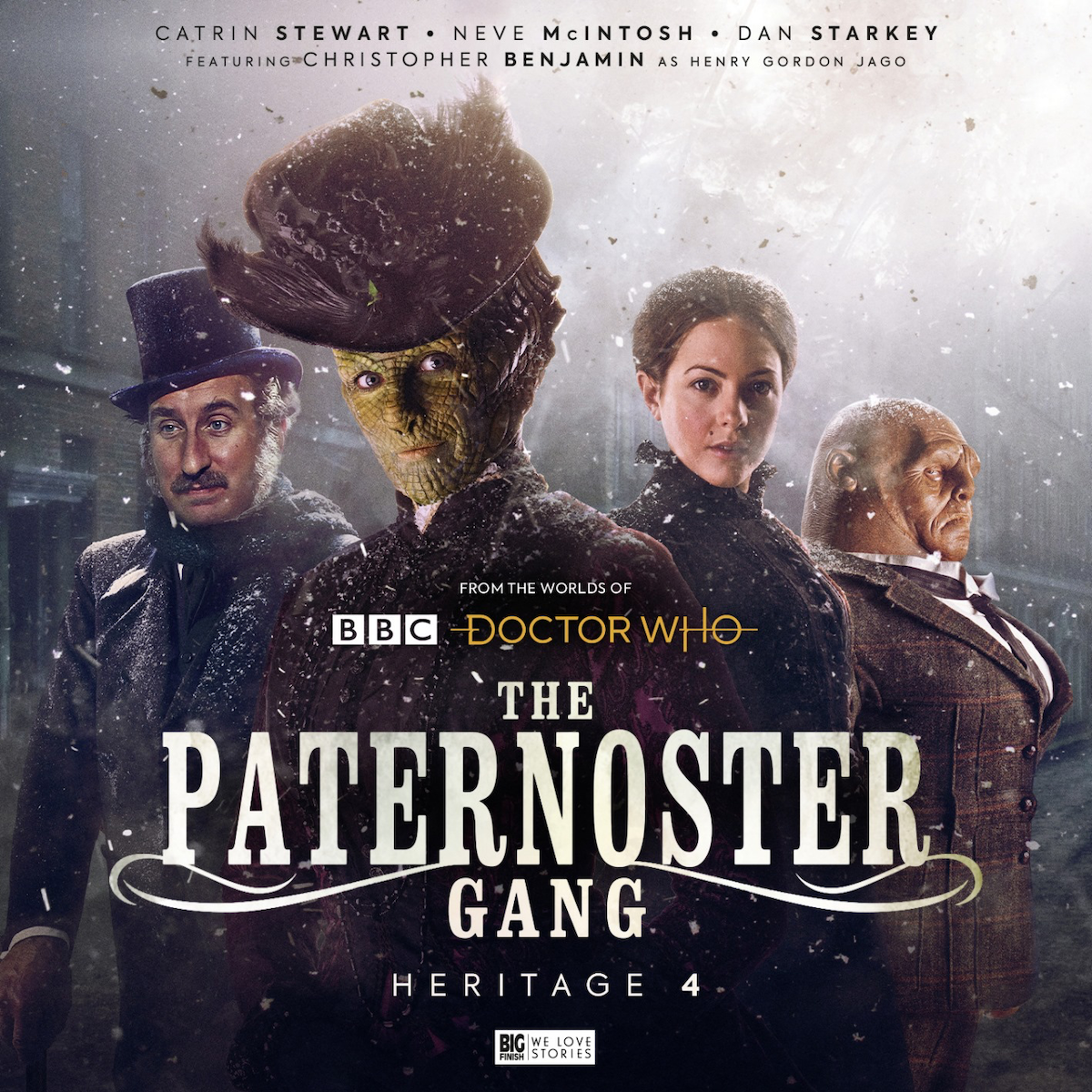 Victorian London harbours many secrets: alien visitors, strange phenomena and unearthly powers.
But a trio of investigators stands ready to delve into such mysteries: the Great Detective, Madame Vastra, her resourceful spouse, Jenny Flint, and their loyal valet, Strax.

If an impossible puzzle needs solving, or a grave injustice needs righting, help can be found on Paternoster Row.
But even heroes can never escape their past…

Victorian London will never be the same again… Neve McIntosh, Catrin Stewart and Dan Starkey return as Madame Vastra, Jenny and Strax the Sontaran for their own audio adventures in The Paternoster Gang – Heritage.

Set during the Victorian London, the Paternoster Gang have finally been reunited. The much loved characters from the Steven Moffat era of Doctor Who will return next year in a new set of audios from Big Finish Productions made in association with BBC Studios.

they’ll be facing the first electronic automated cars in London (very ahead of their time), hordes of zombies, and ghost-like figures which are haunting Greenwich before their former selves have died…

Plus they’ll have to cope with the capers of the Bloomsbury bunch! This intergalactic alien trio, comprising a Sontaran (with Christopher Ryan once again playing a Sontaran) and human couple and their Silurian female servant, will be causing trouble in London – and this town isn’t big enough for two extraterrestrial gangs…

The first adventure for the Paternoster Gang is being released as part of the 8th of March celebratory box set. Following this, four volumes, each containing three adventures are coming out in 2019 and 2020, kicking off with the first volume, Heritage 1, being released in June:

1.1 The Cars That Ate London by Jonathan Morris
1.2 A Photograph to Remember by Roy Gill
1.3 The Ghosts of Greenwich by Paul Morris

Dan Starkey, who plays Sontaran butler Strax, told us about the gangs triumphant return: “Remain calm, human scum! Strax need no longer sulk and polish his grenades! It’ll be a pleasure to get the gang back together: Big Finish listeners can be assured that we’ll be in full prosthetics and restrictive Victorian tailoring in studio to get right back into the Paternoster Row vibe! Can’t wait to get started!”

Neve McIntosh, who plays Madame Vastra, says: “At last our fans will get more adventures with The Paternoster Gang and will find out more about how we came to be!”

The Paternoster Gang Volumes 1-4 are available for pre-order now ahead of their release in June 2019, October 2019, March 2020 and October 2020, at £25 on CD or £20 on download each from www.bigfinish.com and will remain at this price until general release when they will be available for £30 on CD or £25 on download each. Each box set will consist of three audio adventures plus an additional disc of extras.

You can save money with a bundle and order all four volumes at £94 on CD or £80 on download.

And don’t forget to catch Madame Vastra, Jenny and Strax in their Big Finish debut in our celebratory release, The 8th of March, being released on International Women’s Day, 8th March 2019.