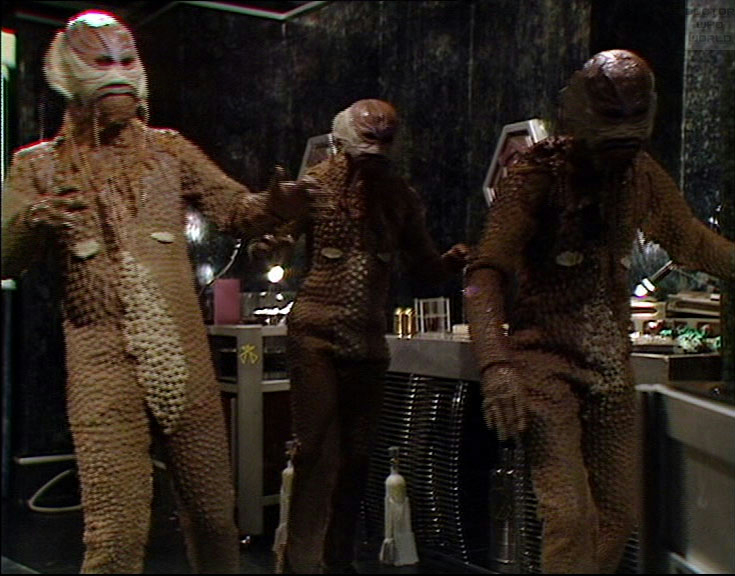 The Marshmen were semi-aquatic humanoids from Alzarius. They had leathery skin, and unusual facial features with tendrils and flaps. They had a very similar cell structure throughout their body. They only came out of their home swamps during Mistfall every 50 years. They were somewhat aggressive towards their Alzarian cousins.

The Marshmen had the ability to adapt quickly to environmental changes and new challenges. These changes could be from a mental point of view or a biological point of view. They could develop new plans and learn quickly, usually by copying other people.
The biological changes were much slower, which meant they could become a new species in thousands of years. Because of those quick changes, they were closely related to the Alzarian spider (their ancestors) and the Alzarians (their descendants). Despite how close they were genetically, the Marshmen still feared the Alzarian spider and hated the Alzarians until they finally made peace with them many years later. (Full Circle, Mistfall)

The Marshmen were responsible for an attack upon the original crew of a Terradonian Starliner that had landed on Alzarius. They killed the crew and evolved over a relatively short time to become identical to the Terradonians.
Some generations later, another group of Marshmen arose from the swamp as Mistfall returned. They attacked the Starliner containing the original Marshmen (unknown to them they were their descendants).

They quickly overran the whole ship, and killed members of the crew. They were forced out when the ship was flooded with rich oxygen that inhibited their ability to adapt. The original crew of Marshmen then left Alzarius in the Starliner. (Full Circle)