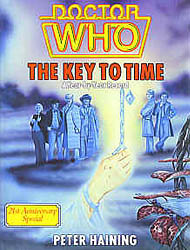 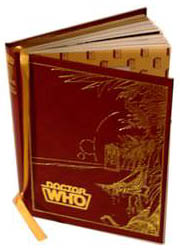 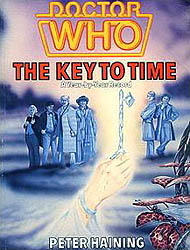 The Key To Time

Doctor Who is not just another television programme. It is a familiar and much-loved British institution that after more than twenty years continues to enjoy enormous success both at home and abroad.

The Key to Time marks the programme’s coming of age – twenty-one years old on 23 November 1984. Peter Haining has adopted the novel technique of exploring the history of the series through key dates in its many life-cycles. He demonstrates – with extensive reference to files kept in the Doctor Who Production office – how much a part of British life the programme has become, and how the impact of this extraordinary phenomenon has travelled further afield. He traces the many changes the series has undergone since the first episode was broadcast in November 1963 – not only in terms of regenerated Doctors but also new methods of programme-making. The beginning of the Jon Pertwee era coincided with the switchover from black-and-white to colour, but Peter Haining also gives details of how many of the special effects were achieved, and how this initially modest television series pioneer ed techniques used in the multi-million-dollar Star Wars.

The enthusiastic support of viewers all over the world has contributed to Doctor Who“s long and happy life, and The Key to Time includes tributes from fans in Britain, Australia, Canada and the United States, in the form of drawings and sketches inspired by the series.

This extensively illustrated special publication, with twenty-four pages of colour photographs, is a superb follow-up to the runaway success of W.H. Allen’s Doctor Who: A Celebration.