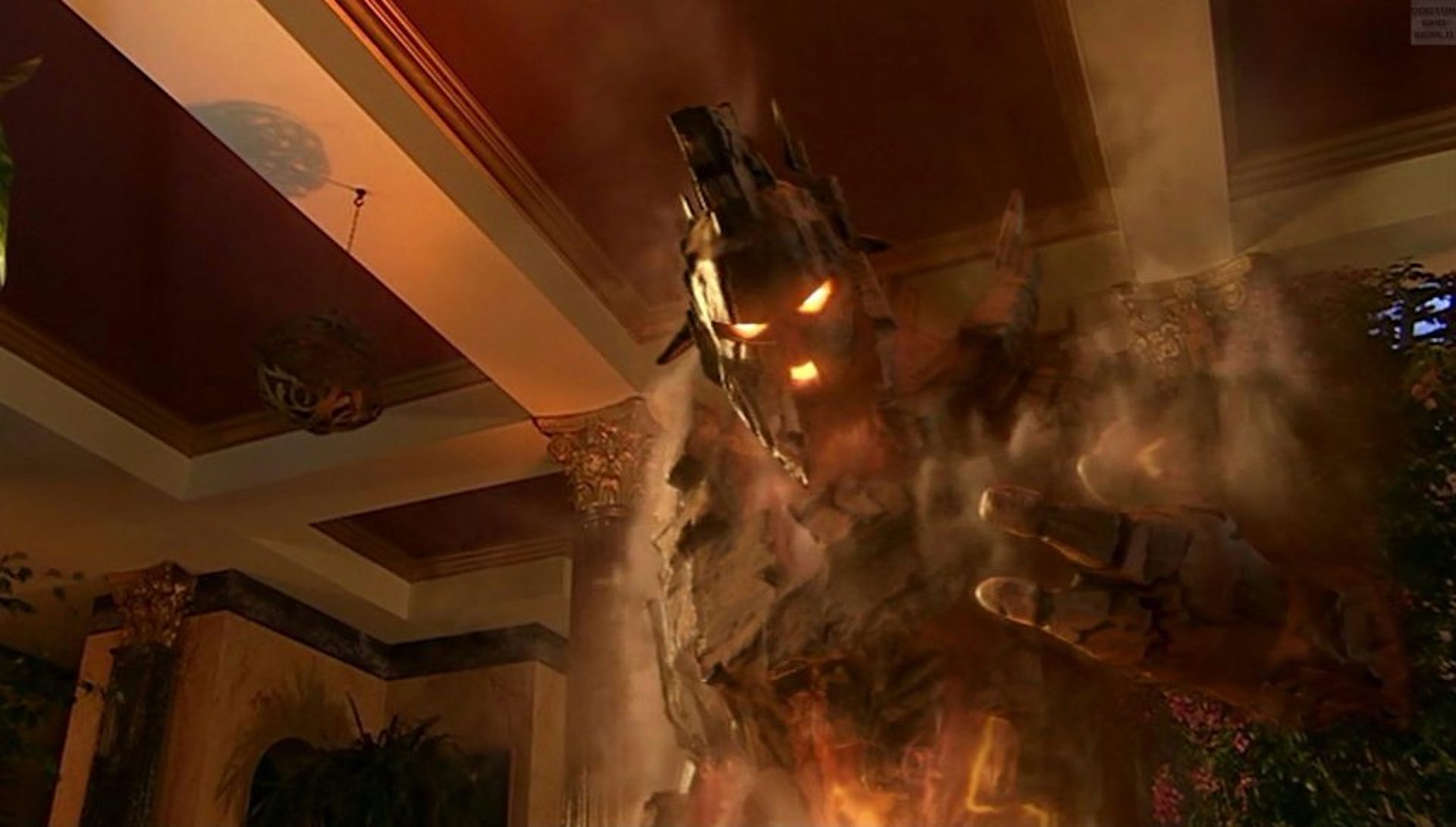 “The Fires of Pompeii”

Easily one of the physically largest races that The Doctor has ever encountered, the Pyrovile were a face of fire-creatures who sought to establish a presence on Earth after their planet Pyrovillia mysterious vanished (Later revealed to have been stolen by the Daleks as part of their attempt to create the ‘Reality Bomb’ (“The Stolen Earth/Journey’s End”).

In the natural state shown – although tThey may have changed from their usual appearance to adapt to their new world, as they were shown possessing humans to be ‘born’ on this world – the Pyrovile were rock-based humanoids with a magma interior. Although they generated enough heat to incinerate human beings, they could still be hurt by the water shot from a simple water-pistol, although it would take far more water than that to kill them, and intense explosions and heat could still damage them if released in sufficient force.

When they appeared on Earth, the Pyroviles assumed a humanoid, rock-based form with a magma interior, their heads resembling a centurian’s helmet and each one exceeding thirty feet in height. They were able to shoot flames out of their mouths, which could turn a human to ashes in seconds. They could be killed by sufficient quantities of water, their internal heat snuffed out and their bodies solidifying. Pyroviles came in two varieties, varying between a shorter, easily-destroyed ‘Foot Soldier’ and more advanced, fully grown Pyroviles, which could reach over twice this height. When disintegrated Pyroviles were breathed in by humans, these particles would slowly transform the humans into Pyroviles, each ‘infected’ human gradually turning to rock until they were entirely stone. The Pyrovilles were also able to enhance the latent psychic powers that human brains possess, allowing some of the humans in Pompeii to witness the future.

At some point in their history, the Pyroviles developed advanced technology from rock, and could travel into space. When their homeworld was stolen by the Daleks as part of their plan to create a ‘reality bomb’ (“The Stolen Earth/Journey’s End”), a group of Pyroviles escaped in an escape pod, which crashed on Earth. The Pyroviles were obliterated in the explosion and eroded into dust in the core of Mount Vesuvius. They waited for thousands of years until they were woken by an earthquake in 62 AD. They influenced the soothsayers of Pompeii into creating a ventilation system, allowing the remains of the Pyroviles to be breathed in through the vents. These affected people, who were able to tell the future accurately from the time rift which formed around Pompeii.

By 79 AD, full-grown Pyrovilles had created a base beneath Vesuvius and planned to convert the power of the volcanic eruption to change all humans into Pyroviles and create a new Pyrovillia. However, The Tenth Doctor and Donna Noble became aware of their plan when they arrived in Pompeii the day before the ‘scheduled’ eruption, Donna’s attempt to convince The Doctor to change history and save Pompeii resulting in him learning about the emerging soothsayers and their mysterious predictions of the future, particularly the Sybilline Sisterhood’s predictions of fire and death following the arrival of the man with the blue box, along with witnessing stone sculptures in the form of circuit boards being guarded by strange stone creatures. Tracking the Sisterhood after one of the Sisters captured Donna, The Doctor used a water pistol to make the stone high priestess identify the alien race, subsequently escaping into stone tunnels underneath Pompeii that led to Vesuvius.

Having tracked down the Pyroville ship in the heart of Vesuvius, The Doctor learned that they intended to trigger a mass conversion of Earth’s population by using the volcano to power an energy convertor. With no other way to stop the Pyroville and preserve history, The Doctor defeated the Pyrovile by triggering the eruption of Mount Vesuvius after overloading the energy convertor, destroying the Pyroviles and their ship in an explosion too powerful for them to survive. Fortunately, The Doctor and Donna were able to use an escape pod to escape the centre of the eruption and return to Pompeii, retreating to the TARDIS and rescuing a family that they had befriended before the entire city was destroyed by the resulting ash. As The Doctor departed, he noted that the eruption of Mount Vesuvius had created a crack in time that reached back into the past, allowing the Pompeii residents to experience visions of the future, but this crack had prevented the natives from actually seeing the true future of Pompeii until The Doctor’s actions ensured that the eruption would take place.