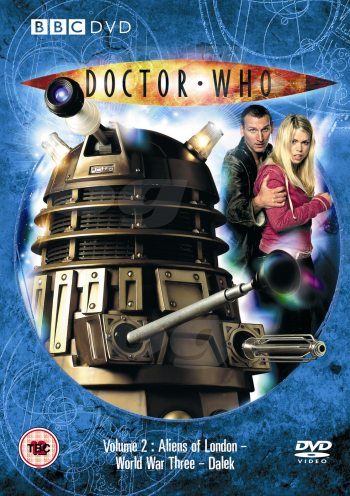 Christopher Eccleston’s Doctor is wise, funny and brave, an adventurer in time and space. His detached logic gives him a vital edge when the world’s in danger. But when it comes to human relationships, he can be found wanting. That’s why he needs Rose.

Rose is a shop-girl from the present day, trapped in a dull existence. From the moment they meet, The Doctor and Rose are soulmates. They understand and complement each other. With nothing to hold Rose back – neither her over-bearing mum nor her hapless boyfriend – she chooses The Doctor and his promise of fantastic adventures across the universe. And he doesn’t let her down…

With high production values, innovative CGI from Oscar-winning company The Mill, an all-star cast and scripts from the cream of British writers, Doctor Who is the ultimate adventure in the human race – gripping, breathtaking and action packed. Introducing Captain Jack, played by John Barrowman

Titles on this DVD

– The Doctor takes Rose home. But when a spaceship crash lands in the Thames, London is closed off and the whole world is on Red Alert. while The Doctor investigates the alien survivor, Rose discovers that her home is no longer a safe haven. Who are the Slitheen?

– Downing Street announces mankind’s first Interplanetary War. But the real danger is much closer to home. The Doctor, Rose and Harriet Jones race against time to unmask the villainous Slitheen, but only Rose’s boyfriend and mum hold the key to salvation. Can the missiles be stopped?

– Beneath the Salt Plains of Utah, the billionaire collector Henry Van Statten holds the last relic of an alien race. When The Doctor and Rose investigate, they discover that The Doctor’s oldest and most deadly enemy is about to break free. It’s a fight to the death, with Rose caught in the middle.