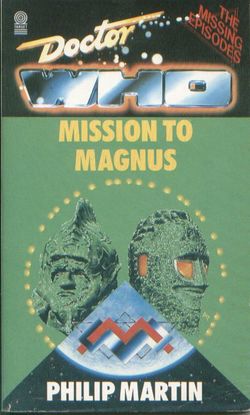 Did I hear ‘Doctor’? Is it The Doctor I have drawn to me?” The laugh became more strident, forcingthe Sixth Doctor to thrust his fingers into his ears in panic and close his eyes, as if here were a frightened child.
The TARDIS has been pulled off course and sent hurtling through space and time. When it finally stops, Peri is amazed to witness The Doctor’s transformation into a cringing coward.

The takeover of the TARDIS by the school bully from the class of the fourth millennium on Gallifrey is only the first of the Doctor’s problems.

On the surface of the planet Magnus more of his old enemies are conspiring to trick the planet’s all-female rulers, The Doctor and Peri have to foil a plot to freeze the entire world and wipe out most of the population.