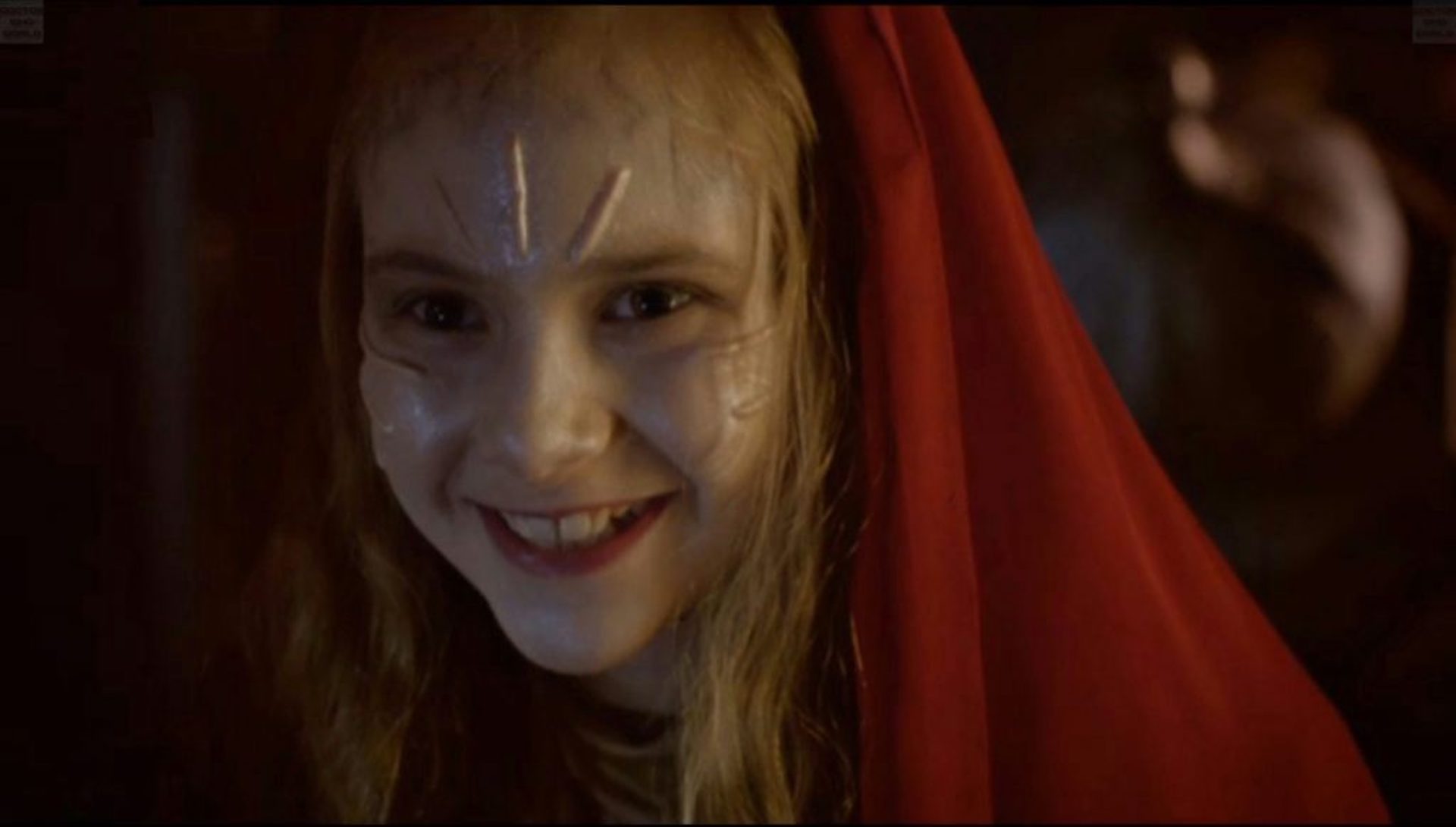 The Queen of Years

The Rings of Akhaten

Merry Gejelh was a Queen of Years on Akhaten. She was chosen as Queen and was taken as a baby, after the last Queen of Years died. She was afraid of singing to the Old God and ran away. As a result of this, she ran into Clara Oswald, who talked her into singing to the God. Clara later regretted this when Merry was kidnapped to be feasted upon by the creature.
Clara and the Eleventh Doctor went to rescue her and fought against the Vigil in order to protect her. After Clara managed to get her to safety, Merry was determined to help The Doctor defeat The Old God, which was actually a parasitic planet. She sang defiantly to the parasite and the other guests followed her example. With the Old God growing weaker from their defiance, and the sheer amount of memories The Doctor possessed, Clara went back to help The Doctor finish off the creature once and for all. (The Rings of Akhaten)

Although she was very knowledgeable about songs and history, Merry was still very young and was frightened of getting the song wrong when she sang it to the Old God. She ran away and hid out of fear of making a mistake and enraging the Old God. When she met Clara, Merry was initially wary of her, but quickly grew to trust her and even hugged her at one point. She looked to Clara for support before she began singing. When Merry was kidnapped by the Old God, she didn’t understand why, having not been prepared for that, and thought she had gotten her song wrong. When Clara and The Doctor arrived to rescue her, Merry, still panicking over her perceived mistake, yelled at Clara and then used her telekinetic powers to pin her against the Mummy’s glass prison. The Doctor managed to calm her down and she released Clara soon afterwards.

Although she was a scared and confused child, Merry was capable of bravery and was determined to help The Doctor defeat The Old God, singing to it in a display of defiance. Merry showed a mature and charismatic side by influencing all of her people to sing along with her and stand up to the parasite that had terrorised their system for so long. She was also selfless and nearly sacrificed herself to the Old God, hoping to protect her people by doing so. (The Rings of Akhaten)

Merry had some psychic abilities. She could form impressions of Akhaten’s intent, and had some form of telekinetic power which she used to restrain Clara when Clara was trying to get her away from the Mummy. She could control these abilities simply by thinking and freed Clara soon afterwards. (The Rings of Akhaten)

Spelling for this character’s surname is not revealed in end crs, on the official website or, as of 27 April 2013, any other way but the closed captioning. Unfortunately, captioning across the world does not agree. Both the BBC iPlayer and BBC One captions by Red Bee indicated it was Gejelh. A piece in the Series 7 soundtrack also uses the “Gejelh” spelling. US iTunes viewers were given Galel. However, the subtitles on the DVD of series 7 part 2 also have Galel. The title of this article thus agrees with the country of origin, but it’s also available through the iTunes spelling. The latter spelling seems to agree more with the pronunciation of the name, which sounds like”guh-LEL”.