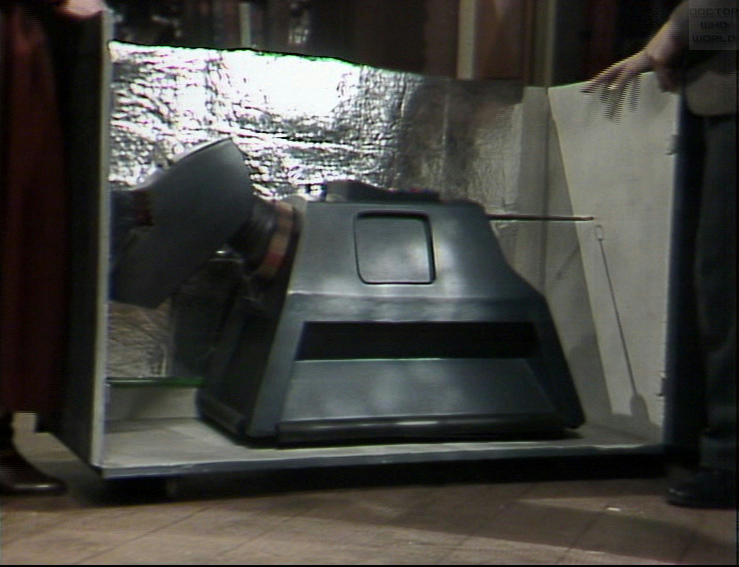 K9 Mark III was the designation given to the third known version of the robot K9. This version was given by The Doctor as a present to his former companion, Sarah Jane Smith. The Doctor left him in a crate in her flat in Croydon in 1978, but she did not actually open the crate until she visited Moreton Harwood in December 1981.

This model of K9 eventually broke down to the point of deactivation during his time alongside Sarah Jane, and sat motionless in an attic for many years because his futuristic inner-workings could not be shared with other humans. Though Mark III was later given the repairs he needed from The Doctor, he remained in poor condition and did not get to enjoy his reactivation for long. In a sacrificial final act, K9 Mark III valiantly gave up his life to eliminate a horde of Krillitanes preying on the human race.

Travels with The Doctor and Adric

After The Doctor had left K9 Mark II to Romana as a gift, K9 Mark III travelled with The Doctor and Adric[1] for a short time. (Inter-Galactic Cat, Conundrum, Planet of Paradise, Plague World, Just a Small Problem)

The Doctor left K9 for Sarah Jane Smith in 1978 at the only address he had for her: the home she had shared with her aunt, Dr Lavinia Smith, on Hill View Road in South Croydon. He left a message with K9: he was to inform Sarah Jane that he was a gift from The Doctor and to “give Sarah Jane Smith my fondest love, tell her I shall remember her always.” (The Hand of Fear, A Girl’s Best Friend) Sarah Jane had already moved out of her aunt’s home by that time and was travelling extensively. Unaware of its contents, Lavinia stored the shipping crate in her attic until 1979. By then, she had purchased a manor house in Moreton Harwood and relocated there. She had the crate moved to the drawing room in anticipation of Sarah Jane’s Christmas visit in 1981, coinciding with her own departure for a lecture in the United States. Sarah Jane and her aunt’s ward Brendan Richards discovered and opened the crate on 18 December 1981. Two days later, K9 helped Sarah Jane defeat Moreton Harwood’s Hecate Cult. (A Girl’s Best Friend)

After this happened, Sarah, Brendan, Lavinia and K9 continued to investigate and stop other cults and witchcraft covens present in Britain. (Powerstone, The Shroud of Azaroth, Hound of Hell, The Monster of Loch Crag, Horror Hotel, The Curse of Kanbo-Ala)

Circa 1983, K9 Mark III “lived” with Sarah Jane in a semi-detached house; their gate bore a “beware of dog” sign. On one occasion, he warned her of impending danger somehow involving The Doctor. Sarah Jane dismissed his sense of danger, and declined to either stay home or take him with her. As a result, he did not accompany her as she was abducted to the Death Zone on Gallifrey. (The Five Doctors) Later, K9 went with Sarah to an archaeological dig in Egypt. (City of Devils) In the early 1990s, K9 assisted her in investigating a supposedly haunted house. (Housewarming) In 1995, K9 assisted Sarah Jane in contacting Alistair Gordon Lethbridge-Stewart with his large databank of telephone numbers. (Downtime) In 1996, Sarah used K9 to hack into records and find Sam Jones’ home address, and translate Lost Boy’s speech. (Interference – Book One)

K9 was briefly possessed by a demonic pig spirit, but was freed when Sarah accidentally electrocuted him. (The Sow in Rut) K9 began slowly breaking down and Sarah Jane was not able to replace K9’s failing recharging batteries and self-repairing systems. He spent months or years between times he was awake, and Sarah Jane abandoned him in a cardboard box behind a television set in her lounge. He was awakened by two burglars lifting the box he was in. He immobilised the burglars with stun blasts and called the police before Sarah Jane got home, depleting the last of his emergency power and shutting down. (A Dog’s Life)

Having essentially given up on being able to repair him, Sarah Jane relegated K9 to a cardboard box in her attic. (Moving On) She w Later,[statement unclear] Hilda Winters had K9 dismantled and analysed. (Mirror, Signal, Manoeuvre)

In early 2007, Sarah Jane encountered The Doctor again, now in his tenth incarnation. He was able to repair K9 sufficiently to restore basic functionality, restricted to minimal power. He used K9 to identify the intelligence-enhancing oil used in a school’s chips as Krillitane oil.

When Mickey Smith woke K9 to break into the school during the ensuing fight with the Krillitanes, K9 pointed out they were in a car. Although Mickey did not immediately understand what K9 was suggesting, he eventually did. He drove the vehicle straight through the glass doors. As The Doctor, Rose Tyler, Sarah Jane, Mickey and Kenny were cornered by the Krillitanes, K9 rescued them through use of his laser. This delayed the Krillitanes until he ran low on power and was left alone. Short on power with only one shot of his laser remaining, K9 needed to be right next to a vat of Krillitane oil, which was now lethal to the Krillitanes, for “maximum impact”. As the Krillitanes closed in on him, their leader called him a “bad dog” after figuring out what he was about to do. K9 defiantly replied, “Affirmative.” He then blew up the school along with himself and the Krillitanes. Sarah was distraught when she learned what her robot companion had done, prompting The Doctor to design a new model which would carry on the memories of the old one. (School Reunion)

From 2008 onward, Sarah Jane kept a photograph of K9 Mark III and her younger self on the wall of her attic study at 13 Bannerman Road, Ealing, along with portraits of Alistair Gordon Lethbridge-Stewart and Harry Sullivan. (Invasion of the Bane)

According to another account, K9 stayed in the family for generations until he was inherited by a stockbroker named Frank in 4997. Since neither Frank nor his fiancéee Gloria were mechanically-minded, they decided to give it to Gloria’s uncle, Professor Frederick Marius. The professor was amazed when examined the old machine, its technology being far in advance of the 20th century. However, Marius was forced to have it scrapped rather than take it with him to the Bi-Al Foundation due to shuttle weight restrictions. He watched as K9 was destroyed, compacted into a tiny metal square. He kept the motherboard as a memento, and later used it as the basis of a new computer which he had constructed at the Foundation, naming it K9 as well… (Tautology)

Mark III included some improvements over past models. The new mechanics of K9 Mark III included larger wheels and a front and back-wheel drive. K9 also had a brand new coat of paint (this time a metallic-blue), (A Girl’s Best Friend) though over time, Mark III rusted to some extent. The paint on his metal casing had faded and chipped away a bit by the time she brought him to The Tenth Doctor to restore some of his functionality. (School Reunion) Mark III also had a handle on the top of the shell to make carrying him easier. (A Girl’s Best Friend) Although Sarah Jane indeed carried K9 Mark III to load him into and out of her car, (A Girl’s Best Friend) the Eleventh Doctor later implied that Mark IV was not the first to be capable of hovering. (The Power Of Three)

K9 claimed that he was shaped like a dog because “the human ego requires a familiar reference point to aid in adjusting to new concepts. Animal forms are comforting to the majority of humans.” (Housewarming)

K9 ran on an electron-fusion nuclear battery. Though K9 usually recharged himself when necessary, Sarah Jane had occasionally done so by clipping jump leads to his antennae. (Housewarming)

K9 was an advanced computer built in the shape of a robot dog. Among the technology included were a tri-state bus driver, a universal asynchronous receiver/transmitter and holographic memory. He was powered by a self-charging nuclear battery. K9 Mark III was programmed with a wide variety of technical knowledge and scientific data which included, among other things, horticulture. K9 could also provide data printouts of any information requested from his memory banks. (A Girl’s Best Friend)

In the original outline to K9 and Company, it would have been eventually revealed that K9 Mark III was actually sent by and under the control of The Master, but this element never made it to the screen. [2] The idea of a mechanical companion to Sarah Jane being partially controlled by an enemy was recycled with Mr Smith in The Sarah Jane Adventures story The Lost Boy.

A publicity photograph of Sarah Jane and K9 Mark III from K9 and Company was displayed in a pan across the 13 Bannerman Road attic at the start of Invasion of the Bane, being only the second use of classic era footage in the revived era, the first being a photo of Brigadier Lethbridge-Stewart an instant earlier.

the Sixth Doctor make-your-own-adventure novel Search for The Doctor, published in 1986, features a descendant of Sarah Jane in the 2050s inheriting K9 Mark III. This book was published two decades before School Reunion and the destruction of this K9 unit.
K9 was dubbed in German by Hendrik Wiethase in The Five Doctors and by Kai Taschner in School Reunion.