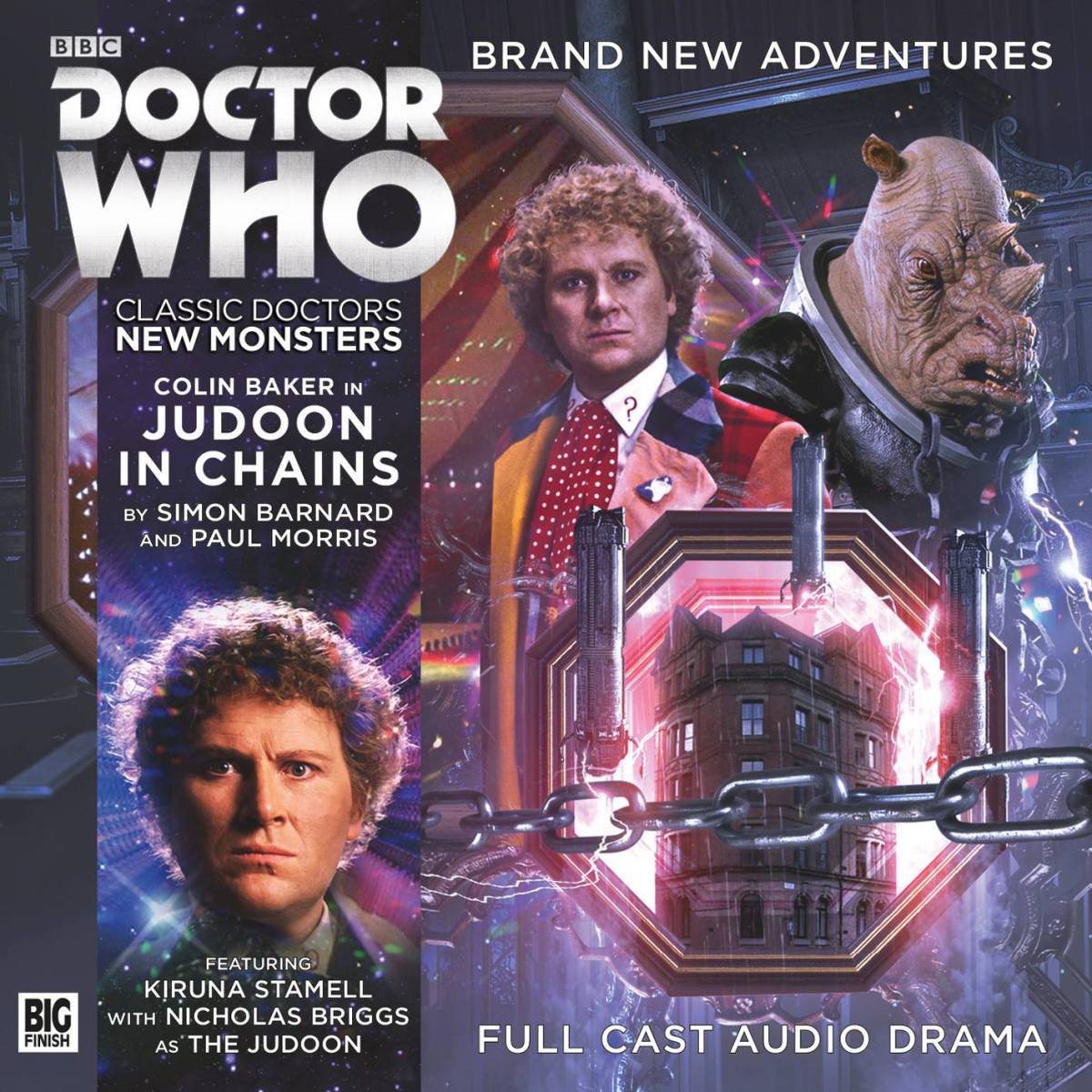 The Sixth Doctor is no stranger to courtroom drama, but faces a very different challenge when he prepares to defend a most unusual Judoon.

After an environmental clearance mission goes wrong, Captain Kybo of the Nineteenth Judoon Interplanetary Force is stranded in Victorian England, bound in chains, an exhibit in a circus show. But he has allies: Eliza Jenkins – known to audiences as “Thomasina Thumb” – and the larger-than-life”clown” in the colourful coat.

Uncovering a trail of injustice and corruption, The Doctor and Kybo soon find themselves on trial for their lives…

Judoon in Chains was the second story in Classic Doctors, New Monsters: Volume One, produced by Big Finish Productions. It was written by Simon Barnard and Paul Morris and featured Colin Baker as the Sixth Doctor.
Gedge had wanted to hire the Ogrons.
The planet Aetia was inhabited by a psychic race, named by The Doctor as the Aetius. When under threat of death, the Aetius entered the minds of the Judoon force and allowed them to appreciate the beauty of the planet and of life. This made them subconsciously less willing to destroy it.
Due to his clothing, The Doctor is, once again, mocked for resembling a showman. He chooses to stay in captivity for a while as Jaggers’ clown, in order to help Kybo.
Jaggers describes The Doctor as “a party coloured popinjay”.
The Doctor speaks Judoonese.
Kybo reads Frankenstein, Great Expectations, Moby Dick, and Robert Burns’s poetry.
Upon hearing the first verse of Kybo’s haiku, The Doctor decides to visit Samuel Taylor Coleridge in Porlock.
Judge Burrows believed that Captain Kybo was “a rhinoceros in a kilt”.
The Judoon use an H2O scoop to transport the whole of the courtroom and its inhabitants to another planet. They were use a DNA scoop to transport Gedge to the courtroom against his will.
Once again, the Judoon are sticklers for obeying the smallest of rules. The Doctor tricks them into using the correct entrance of the circus, following the painted signs and entering the Hall of Mirrors.
Although the Judoon mainly work for the Shadow Proclamation, the Captain explains that they also perform nonessential side missions on the side, such as terraforming planets for investors who wish to buy them.
The Doctor states that the Judoon brain could fit onto a teaspoon.
The Aetius describe the Judoon as “such unimaginative creatures”.
Katura is located 3.62 light-years from Mars.
The Judoon homeworld is Judoonia. It had mountains 1, 000 miles high.
The Doctor says, “I am not an animal, I am a Time Lord!”This is a reference to the line, “I am not an animal! I am a human being!” from The Elephant Man starring John Hurt as the title character John Merrick.
The Doctor plans to visit Samuel Taylor Coleridge in Porlock. The Person from Porlock was an unwelcome visitor to Coleridge’s home in 1797 who interrupted him while he was composing his poem Kubla Khan, which came to him in a dream. The interruptedition caused him to forget the remaining lines and the poem was never completed.
The Doctor finds himself acting as a defendant in a courtroom. He claims that he is not overly fond of courtrooms. (The Keys of Marinus, The War Games, The Mysterious Planet, Trial of the Valeyard)
The Judoon need translation devices in order to “assimilate” the target language. (Smith and Jones, Prisoner of the Judoon)
The courtroom is moved to Mars due to the Judoon lacking jurisdiction on Earth. (Smith and Jones)
The Judoon’s chosen method of transporting the courtroom is a H2O scoop. (Smith and Jones, Revenge of the Judoon)
The Judoon like to follow the laws and regulations of the planet that they are on, no matter how ridiculous or unimportant. (Prisoner of the Judoon)
Mr Gedge laments working with the Judoon, wishing that they had hired Ogrons. (Day of the Daleks)
The Doctor can speak Judoonese. (The Stolen Earth)
The Commander executes Jaggers on the spot for committing assault. They call it “evaporating”. (Smith and Jones)
The Doctor mentions that the Judoon work with the Shadow Proclamation. (The Stolen Earth)
Kybo reads Frankenstein, the novel’s author, Mary Shelley, would later travel with him in his eighth incarnation. The novel itself was inspired by the circumstances in which she met him. (Mary’s Story)
Captain Kybo is forced to perform in Jaggers’ circus in the same manner as the Eighth Doctor’s Eutermesan companion C’rizz in Jacob Crackles’ freakshow in 1851 (Other Lives) the alien creatures in Thaddeus P. Winklemeyer’s freakshow were in Buzzard Creek, Arizona in 1905 (Freakshow).
The Doctor says, “A Judoon commune on the Moon.” (Smith and Jones)