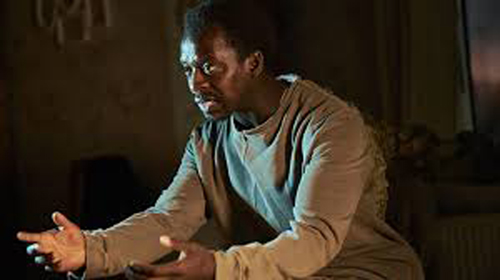 The Coach with the Dragon Tattoo

Jasper Adeola was a policeman, the husband of Vivian, and the father of Damon, Jarvis, and Tanya. He died of a stroke.

Jasper was born in 1973. When the family went to see the Regimental Horses, Tanyajumped in a puddle of horse wee, shouting, “Puddle, puddle!” This event caused him to start calling Tanya”Puddle”. He was a policeman, and he used to look in on Tanyaevery night, even if he got home”at like 3am”. (Nightvisiting) He sang Rock-a-bye Baby to her. (The Stone House)

Later on in his life, Tanyalooked in on Vivian and Jasper to make sure they hadn’t gone in the night. (The Coach with the Dragon Tattoo) According to Tanya, he used to say that people don’t set out to be monsters,”they start by getting a little taste for it and then they like it, so they taste some more. And then before you know it…” (Co-Owner of a Lonely Heart)

In October 2014, (Nightvisiting) he died of a stroke after being fine the previous evening at dinner. (The Coach with the Dragon Tattoo)

On the two year anniversary of his death, Tanya, Vivian, Damon and Jarvis visited his grave. Later, the Lankin used his image to try to feed on Tanya’s grief. Its attempt was thwarted by Tanya, who fed the Lankin with anger. (Nightvisiting)