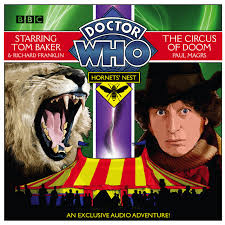 Hornets Nest The Circus Of Doom

The circus has come to town – and so has The Doctor! Watching the parade pass by in 1832, he finds the people of Blandford strangely drawn towards the garish big top. He knows something is terribly wrong. The only thing to do is pay a visit. Meanwhile Adam Farrow finds his sister caught up with the circus and its sinister ringmaster. What is behind Antonio’s almost hypnotic power, and how is it connected with an event in The Doctor’s future? Seized by clowns and forced into the centre of the ring, The Doctor encounters the fiercest of all circus acts. Yet something much more terrifying lurks in the wings – and the sound it makes is horribly familiar. Lives will be lost before the circus moves on – and The Doctor will face his own doom on the high wire.

The Circus of Doom is the third story in the Hornets’ Nest arc, a series of five audio dramas featuring Tom Baker as the Fourth Doctor alongside Richard Franklin as Mike Yates.
oots: Something Wicked This Way Comes, Nights at the Circus, Don’t Look Now (Antonio the Venetian dwarf conducts his series of murders dressed in a red cloak), The League of Gentlemen episode ‘How the Elephant Got its Trunk’.

Intertextuality: The Doctor stopping off for sweets in a small shop in a remote English village seems to deliberately recall the opening pages of DWM comic strip The Iron Legion, set in Stockbridge
Antonio describes the TARDIS’ materialisation sound as “An elephantine roar”, which recalls similar descriptions by Terrance Dicks in his Target novelisations.

Dialogue Triumphs: ‘I do abhor the waste of good gobstoppers!’

Continuity: The Circus of Delights has elephants, lions and horses, but no tigers. Its several animals and human company are all under the influence of the Hornets to some degree – it would appear at least that the lions are of the stuffed variety encountered in The Stuff of Nightmares (perhaps the elephant, mentioned there also, is from the circus as well?)

Antonio the dwarf first encountered the Hornets in Venice when he was thirteen years of age in 1765. Sheltering in one of the lagoons of the city he saw a ‘vision’, actually The Doctor’s TARDIS operated by the hornets themselves. Allowing them to enter him he appears to have had an extended lifespan, but once the hornets leave him he is reduced to a desiccated or petrified (he is described as ‘grey’) husk, the garden gnome Mike spots in the garden of The Nest. Kept in stasis as the other instruments of the Hornets severally are, it is likely that Antonio is truly dead.

The Doctor uses the TARDIS’ equipment to ‘sniff out’ the Hornets through time, like a bloodhound. As the time of arrival pre-dates the invention of jelly-babies he admits to also being fond of aniseed balls and humbugs. He also likes tigers. He reveals to Mike that he brought back Ernestina’s shoes following the events of the previous story, and Mrs Wibbsey, offering her “a new situation”, which she (apparently) gladly took up, being most impressed with the mod-cons of the twenty-first century [is she also contained within The Nest’s stasis field?]

Links: The Dead Shoes, The Sting in the Tale (by way of introduction)

Two trips back into the past and events are beginning to have an air of déjà vu about them with The Doctor encountering the Hornets, having a chat and the two parties agreeing to meet again later/earlier (shaking fists/antennae). Nevertheless the performances here are nice, especially Stephen Thorne who washed memories of The Ghosts of N-Space almost entirely away (although it’s almost the same accent…) The really good twist of course is in Antonio’s vision of the TARDIS, and the promise of a novel deviation to the rather linear story so far. Fingers crossed…